In NYC, I don’t think it’s particularly difficult to find inspiration. In fact, cities and travel are always filled with it, from the crowded or deserted streets, the people there, the way they dress or a certain “look” they have and everything in-between. So, while I always feel inspired by my current surroundings, I also love finding new (or perhaps old) things to get excited about, thinking up ideas, images…from music, books, films, anything at all.

In a previous post I had mentioned a themed photo shoot that I had worked on. While I’m still not ready to reveal it in its entirety (I know, editing takes a VERY long time, especially when you are a VERY busy girl) here is another image I was working on: 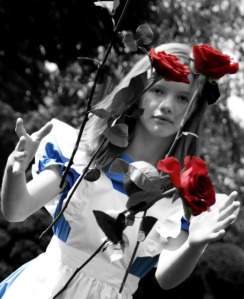 Okay, not much of a reveal since this is up on my website, but still. I’m sure you can tell the theme of this shoot is based on Alice in Wonderland. Though not really as fashion oriented as I’d have liked (who knew it was so difficult to find a blue dress?!), I think I got some nice photos. The series will be titled “Sunday in the Park with Alice” which will be better explained once the full series of photos is seen. The shot pictured above I may get rid of the blue, but I really liked this because of how nicely the roses happen to frame her face. I’m sure there will be a number of “Alice” inspired photo shoots to come when the release of Tim Burton’s Alice in Wonderland film hits the screens.

Anyway, I thought about this earlier today when I looked at some photos featured in the October issue of Harper’s Bazaar by Tim Walker: 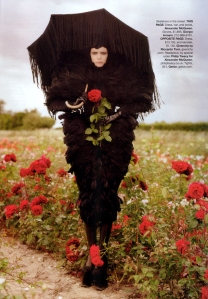 By Tim Walker via Atomik

His photos turned out completely fantastic and incredibly inspired. They have a sort of, beautifully tragic quality to them, and Tim Burton is definitely a fascinating individual to draw from creatively. I’m pretty excited to check the MoMa’s Tim Burton exhibit come November. Check out the rest of the images via Atomik.

I'm a freelance photographer based in Paris.
View all posts by Brandie →
This entry was posted in Uncategorized and tagged Alice in Wonderland, inspiration, MoMa, Tim Burton, Tim Walker. Bookmark the permalink.