Of Film and Fashion

I came across an interesting piece in the NYT via Jezebel. The article makes a great observation about the waning influence of film on fashion. With the prevalence today of celebrities and bloggers now providing a more immediate, stronger connection with the consumer I can certainly see the difficulty in citing a single film as inspiration for an entire collection. All that aside, let’s consider that nearly all Oscar nominations for costume design go to period films in which the designs are elaborate and often intricately detailed, as opposed to say, films based in the present and therein lies the problem. A film based in the present, with stylings from the present, is not going to inspire new fashions.

I would agree that the classics and even iconic film individuals are able to remain inspirational in fashion for the fact that their style remains timeless. Case in point: Audrey Hepburn. You may recall a 2006 ad campaign in which The Gap presented pieces inspired by Ms. Hepburn’s chic style.

However,  even if films no longer have an obvious or direct influence on a designer’s entire collection, its’ influence and inspiration certainly manifests itself through other fashion related outlets such as fashion photography. Jezebel notes a 10-page spread in the March issue of Vogue featuring models in tribal tattoos with the greenery of a forest as the backdrop, recalling Avatar as the influence and utilizing the alien-like shoes from Alexander McQueen’s Spring 2010 collection.

Taking film influence even further, they cite the March issue of Harper’s Bazaar with a photo spread inspired by Bonnie and Clyde:

As well as a feature recreating scenes from Pedro Almodovar films: 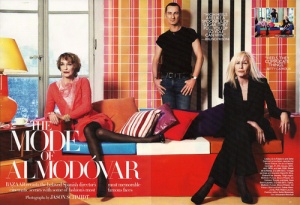 Of course film inspiration in fashion editorials such as the above is not new. Vanity Fair recreated scenes from classic Hitchcock films such as Rear Window for its’ March 2008 issue:

Personally, I love the idea of recreating film scenes for fashion editorials, or simply using a film as inspiration for a shoot.

One can even find films inspiring department store window displays, such as Bloomingdale’s using Tim Burton’s Alice in Wonderland as its’ inspiration for the current window display: 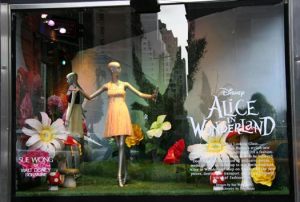 Anyhow, I certainly think this is an interesting discussion. You can read the full New York Times article here.