Things have been busy busy around here. This past weekend I had an in-studio look book shoot for a jewelry designer (I’ll post more on this later) and the previous weekend I did a shoot with a friend and model, Howah.

Howah both modeled for the shoot as well as helped out with the art direction, coming up with the concept himself. The title is, you guessed it…”Glimpses.” The idea is that I, the photographer, have caught site of a fashionable subject in the early hours of sunrise and follow said subject as they wander after a night out. 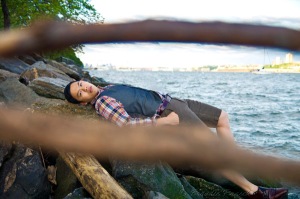 The above was the first “scene” we shot, and the goal was to shoot right at sunrise. We were running a bit late so I think we didn’t quite achieve the look originally planned for this shot, as I think it simply looks more like daylight, but the shots nevertheless turned out nicely. Howah informed me, as I hadn’t known before, that if you up I think a bit past 96th St. an area near the river isn’t fenced off and you can actually climb onto the rocks. 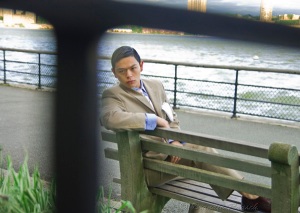 The idea of portraying the subject as if I’m following him, trying to be unseen, while capturing his image is shown by actually photographing through various objects, such as the above sticks or fence below. I think it also adds to the effect for the viewer, as if you are actually standing behind the fence, spying on the subject yourself. We shot several different “scenes” around Riverside Park. 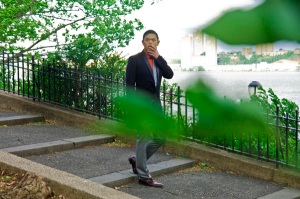 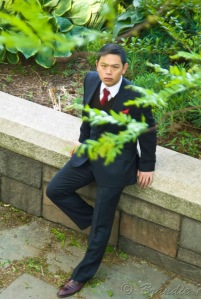 I tried to have a different object obscuring the view in each scene. The above is actually cropped so you aren’t seeing the bottom of the photo which actually has the concrete side of the balcony-type section I was shooting from in view as well.

Despite absolutely freezing weather that morning and poor Howah having to change outfits several times in these windy conditions and my hands becoming so cold it was difficult to operate my camera, I think we ended up with a successful shoot. Definitely an adventure and most certainly the most productive weekend morning I’ve had in a while with a 5:30am shoot time.

I'm a freelance photographer based in Paris.
View all posts by Brandie →
This entry was posted in fashion, photography and tagged fashion, NYC, photo shoot, photography, Riverside Park. Bookmark the permalink.