There’s An App for That

This week is going to get crazy busy. If I haven’t mentioned it before, Fashion Week kicks off Thursday. So far I’m going to one show on Friday and several more on Saturday. Hopefully many more! 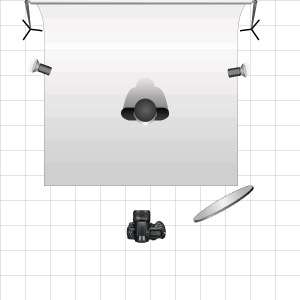 Plus, I had a shoot Sunday and another Monday night so I have plenty of editing to do. For now, I thought I’d share an interesting little app I found for my phone called Lighting Studio. I have an Android phone but I would imagine there’s something similar for the iPhone.

This handy little phone app let’s you create a diagram of your lighting setup which is great to have a record of in case you ever want to go back to it to recreate it. I used the lighting setup to the left for my shoot on Sunday.

I actually wrote to the app developer about a view additions I’d like to see so we’ll see if that happens. For example, I actually had the strobes creating the backlight each facing a V-flat, but the Lighting Studio app currently doesn’t have an option to select V-flats. Also, the reflector I have in the diagram is a stand-in for a beauty dish with a diffuser for now because there also isn’t an option to use that, and I had it on a boom stand. Anyhow, aside from a few changes I’d like to see I absolutely think this is a great idea, very easy to use and being a mobile app, it also allows you to easily upload and share any lighting diagram via email, Facebook, etc.

I'm a freelance photographer based in Paris.
View all posts by Brandie →
This entry was posted in photography and tagged Android, lighting, mobile app, photography, studio. Bookmark the permalink.

1 Response to There’s An App for That