A lot has been written and rumored about “fashion” photographer Terry Richardson. I say “fashion” because, well, let’s be honest…the models don’t always have much on in the way of clothes in his photographs, so…fashion? 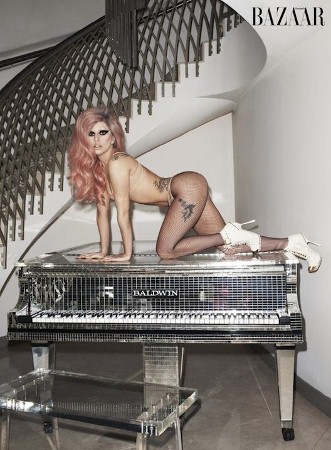 Many of you may have read recently about the 300 page coffee table book, Lady Gaga, that Richardson has been working on with, of course, Lady Gaga, chronicling several months spent photographing her on and off the stage. As BlackBook Mag points out, this is not the first time Richardson has photographed Gaga, having previously shot her for the May issue of Harper’s Bazaar.

In fact, Richardson has photographed many celebrities as well as models and has shot for numerous fashion magazines. And that’s just the problem. Why are these people still working with him?

I don’t know Terry Richardson personally, and honestly, I don’t really want to know him. I guess I’m wondering if anyone else feels the same way at all? Because the industry has heard what there is to hear about him and that gossip has been met with a resounding “we don’t care.” If you haven’t heard any of the details about the pervy photog, you can head over here and catch up. If you aren’t familiar with his work, a quick Google search will turn up images such as these. Even without the rumors, I was never a fan of his work. I won’t deny that he has his own style, and if that’s what people want, then to each his/her own, but it isn’t for me.

This is perhaps a bit of a long winded rant, but my point is that I find it incredibly disappointing, both as a photographer and as a woman, that artists such as Lady Gaga, who has millions of fans, agree to work with and even appear friendly with someone like Richardson, who has a reputation for being exceptionally disrespectful of women. If industry standards don’t change, if someone doesn’t stand up and say that it isn’t right, then others like him will do whatever they want to whoever they want just because they can. It is rather uninspiring when someone such as Richardson is continually hired to shoot for top magazines, all of the editors knowing how he treats models on set, while others struggle to get those jobs and would probably treat their entire team with the utmost respect.

Does anyone else agree? Or if you don’t, interested in your argument on that side as well.

I'm a freelance photographer based in Paris.
View all posts by Brandie →
This entry was posted in photography and tagged Lady Gaga, photography, Terry Richardson. Bookmark the permalink.